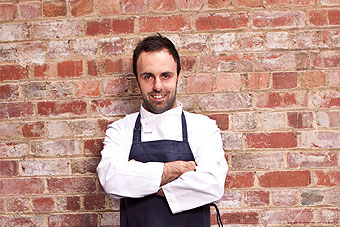 Born in Milano and growing up in Turin, Italy, Paolo Masciopinto’s interest in the kitchen began at an early age after working in restaurants during the summer holidays.

In September 2003, aged just 17, Paolo moved to London and secured a position as Commie Chef at Michelin Star restaurant Locanda Locatelli, where he gained invaluable knowledge and passion for Italian influenced cuisine from Giorgio Locatelli. After two years, he began working with Chef Monica Paolasini at Locanda Ottoemezzo and developed his skills as a Chef de Partie.

In 2006, Paolo was honoured to accept an offer from Monica Paolasini to move back to Italy to help with the opening of her restaurant Ristorante Bel Ami Punta Ala in Tuscany, which specialised in meats. Following the launch he returned to his hometown and worked at Ristorante Birichini (1 Michelin Star restaurant) in Turin as their Chef de Partie.

Paolo landed his first head chef position in 2007 at Ristorante UCHI in Turin, specialising in fish from Northern Italy. After a year, he decided to move to Australia where he started working at Grossi Florentino as their Sous Chef. After two years, mains and sauces became his specialty.

After short stints as Sous Chef at Sarti and Stokehouse, Paolo was most recently Head Chef at Sosta Cucina.

In March 2013, Paolo was excited by the opportunity to re-join the Sarti family as Head Chef where he will lead the bistro style eatery with a fresh new menu that focuses on, and embraces his passion for, traditional Italian cuisine.